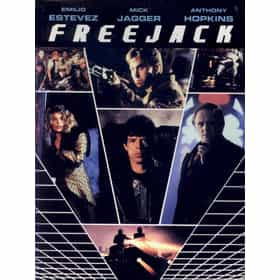 Freejack is a 1992 science fiction action film directed by Geoff Murphy, starring Emilio Estevez, Mick Jagger, Rene Russo and Anthony Hopkins. Upon its release in the United States, the film received mostly negative reviews. The story was adapted from Immortality, Inc., a 1959 novel by Robert Sheckley. Aside from the most basic elements – the journey of a modern man into a future where everything is for sale, and the presence of a "spiritual switchboard" in which souls are suspended – the cyberpunk plot bears little resemblance in tone or content to Sheckley's story, where discovery of scientific proof of the afterlife altered society's views of the sanctity of life. ... more on Wikipedia

Freejack is ranked on...

Freejack is also found on...