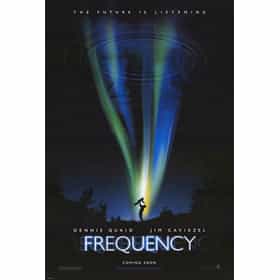 Frequency is a 2000 American science fiction thriller film. It was co-produced and directed by Gregory Hoblit and written and co-produced by Toby Emmerich. The film stars Dennis Quaid and Jim Caviezel as father and son, Frank and John Sullivan respectively. It was filmed in Toronto and New York City. The film gained mostly favorable reviews following its release via DVD format on October 31, 2000. In 2014, a television series adaptation of the film was announced. ... more on Wikipedia

Frequency is ranked on...

Frequency is also found on...