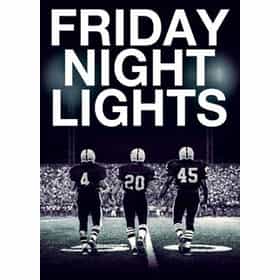 Friday Night Lights is a 2004 sports drama film, directed by Peter Berg, which documents the coach and players of a high school football team and the Texas city of Odessa that supports and is obsessed with them. The book on which it was based, Friday Night Lights: A Town, a Team, and a Dream by H. G. Bissinger, follows the story of the 1988 Permian High School Panthers football team as they made a run towards the state championship. The film won the Best Sports Movie ESPY Award and is ranked number 37 on Entertainment Weekly's list of the Best High School Movies. ... more on Wikipedia

Friday Night Lights is ranked on...