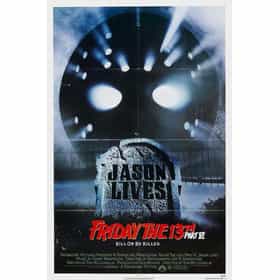 Friday the 13th Part VI: Jason Lives is a 1986 slasher film, the sixth film in the Friday the 13th film series. The film was written and directed by Tom McLoughlin. Although the original concept called for Tommy Jarvis, the protagonist of parts IV and V, to become the new villain, the poor fan reception of Friday the 13th: A New Beginning prompted the producers to bring back Jason Voorhees as the series' antagonist. In resurrecting Jason, McLoughlin made Jason an explicitly supernatural force for the first time in the series ... more on Wikipedia

Friday the 13th Part VI: Jason Lives is ranked on...