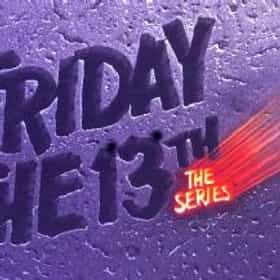 Friday the 13th: The Series

Friday the 13th: The Series is an American-Canadian horror television series that ran for three seasons, from October 3, 1987 to May 26, 1990 in first-run syndication. The series follows Micki and Ryan, owners of an antiques store, and their friend, Jack Marshak, as they try to recover cursed antiques, to put them into safety in the store's vault. Originally, the series was to be titled The 13th Hour, but producer Frank Mancuso, Jr. thought this would turn away viewers and instead took the name Friday the 13th to deliberately draw in audiences. Despite this title, the series has no story connections to the film series of the same name, as Jason Voorhees does not make an appearance, nor ... more on Wikipedia

#634 of 802 The Best TV Shows To Binge Watch 1.3M VOTES Bored? Not anymore! These are the best TV shows for binge-watching. The greatest television shows in the world are ranked he...
#1352 of 2,297 The Greatest TV Shows Of All Time 1.5M VOTES Choosing the best TV shows of all time means taking into account the best TV dramas, the best TV comedies, the best cartoons...
#27 of 70 The Creepiest Shows In TV History 52.3k VOTES Television loves to push the boundaries of what can be shown to a general audience. The medium has evolved from being a pl...
#46 of 91 The Best TV Shows Based on Movies 86k VOTES List of the best TV shows based on movies. Here are the rankings of the top television series that all began with a film. Wh...
#397 of 510 The Best '80s TV Shows 210.4k VOTES List of the best television shows from the '80s, as ranked by television fans. In the 1980s, sitcoms were among the most tal...
#38 of 113 People who voted for Friday the 13th: The Series... also upvote Twilight Saga Franchise on The Most Overrated Movies of All Time The Best Horror TV Shows 26.6k VOTES The very best horror shows on television, ranked from best to worst. This list of the greatest horror shows also includes pi...
#19 of 53 The Most Exciting Horror Series Ever Made 1.9k VOTES The best horror TV shows ever aired are some of the most harrowing series to watch on television, but which are the most exc...
#8 of 24 The Best 1990s Horror Series 3.5k VOTES Looking for a great show that will give you a bit of a scare? These are the best 1990s horror series ranked from best to wor...