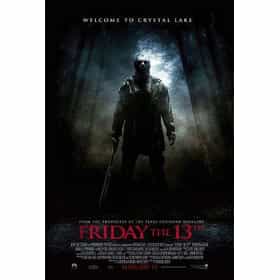 Friday the 13th is a 2009 American slasher film written by Damian Shannon and Mark Swift, and directed by Marcus Nispel. The film is a reboot of the Friday the 13th film series, which began in 1980, and is the twelfth installment in the franchise. Shannon and Swift wrote the screenplay for the 2003 crossover Freddy vs. Jason. Friday the 13th follows Clay Miller as he searches for his missing sister, Whitney, who is captured by Jason Voorhees while camping in woodland at Crystal Lake. ... more on Wikipedia