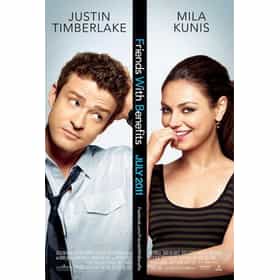 Friends with Benefits is a 2011 American romantic comedy film directed by Will Gluck and starring Justin Timberlake and Mila Kunis. The film features a supporting cast that includes Patricia Clarkson, Jenna Elfman, Bryan Greenberg, Nolan Gould, Richard Jenkins, and Woody Harrelson. The plot revolves around Dylan and Jamie, who meet in New York City and naively believe adding spice to their friendship will not lead to complications. Over time they begin to develop deep mutual feelings for each other, only to deny it each time they are together. Principal casting for the film took place over a three-month period from April to July 2010. ... more on Wikipedia

Friends with Benefits is ranked on...

Friends with Benefits is also found on...