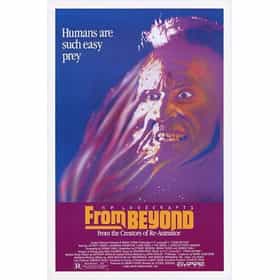 From Beyond is a 1986 American science fiction-body horror film directed by Stuart Gordon, loosely based on the short story of the same name by H. P. Lovecraft. It was written by Dennis Paoli, Gordon and Brian Yuzna, and stars Jeffrey Combs, Barbara Crampton, Ken Foree and Ted Sorel. From Beyond centers on a pair of scientists attempting to stimulate the pineal gland with a device called The Resonator. An unforeseen result of their experiments is the ability to perceive creatures from another dimension that proceed to drag the head scientist into their world, returning him as a grotesque shape-changing monster that preys upon the others at the laboratory. ... more on Wikipedia

From Beyond is ranked on...

From Beyond is also found on...