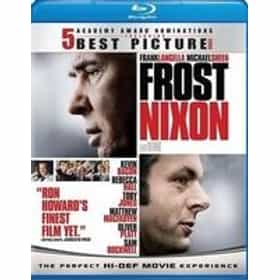 Frost/Nixon is a 2008 British-American historical drama film based on the 2006 play of the same name by Peter Morgan, who also adapted the screenplay. The film tells the story behind the Frost/Nixon interviews of 1977. The film was directed by Ron Howard and produced for Universal Pictures by Howard, Brian Grazer of Imagine Entertainment and Tim Bevan and Eric Fellner of Working Title Films, and received five Academy Award nominations, including Best Picture, Best Actor and Best Director. The film reunites its original two stars from the West End and Broadway productions of the play: Michael Sheen as British television broadcaster David Frost and Frank Langella as former United States ... more on Wikipedia

Frost/Nixon is ranked on...

Frost/Nixon is also found on...