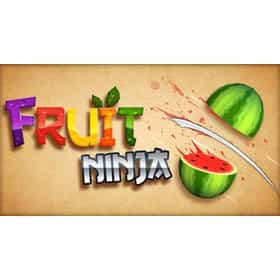 Fruit Ninja is ranked on...

#7 of 49 The Most Addictive iPhone Games That You Can't Put Down 4.1k VOTES Addicting iPhone games are distractions that you simply can’t put down. They consume your waking hours (maybe even your drea...
#20 of 78 People who voted for Fruit Ninja... also upvote Pirates of the Caribbean Franchise on The Most Rewatchable Movies also upvote Dark Knight Franchise on The Most Rewatchable Movies The Best iPhone Apps, Ranked 14.4k VOTES What are the best iPhone apps? The best apps for iPhone include programs that help us be more efficient, but some are just t...
#3 of 36 The Best Mobile Games For Kids 249 VOTES There's no shortage of great games available for mobile. However, not every game will be suitable for kids. With so many mob...
#15 of 49 The Best Windows Phone Apps 1.1k VOTES The best Windows phone apps are all here for all Windows phone users to discover the best apps for Windows phone. With an am...
#15 of 60 The Best Xbox 360 Arcade Games 2.6k VOTES List of the best Xbox 360 Arcade games, as voted on by gamers like you. Whether you download them from the store or buy th...