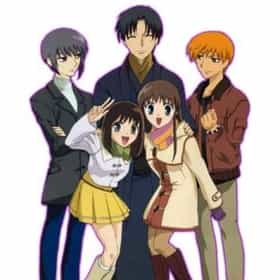 Fruits Basket, sometimes abbreviated Furuba, or Fruba, is a Japanese shōjo manga series written and illustrated by Natsuki Takaya. It was serialized in the semi-monthly Japanese magazine Hana to Yume, published by Hakusensha, from 1998 to 2006. The series was also adapted into a 26-episode anime series, directed by Akitaro Daichi. The series tells the story of Tohru Honda, an orphan girl who, after meeting Yuki, Kyo, and Shigure Sohma, learns that twelve members of the Sohma family are possessed by the animals of the Chinese zodiac and are cursed to turn into their animal forms when they are weak, stressed, or when they are embraced by anyone of the opposite sex that is not possessed ... more on Wikipedia

The Best Fruits Basket Fanfiction, Ranked 104 votes Fruits Basket is an older anime that has come roaring back into popularity thanks to its 2019 reboot. The manga came out in ...

Fruits Basket is ranked on...