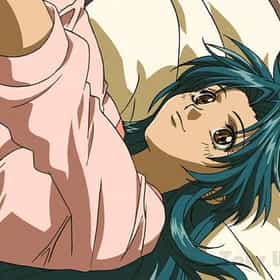 Full Metal Panic! is a series of light novels written by Shoji Gatoh and illustrated by Shiki Douji. The series follows Sousuke Sagara, a member of the covert anti-terrorist private military organization known as Mithril, tasked with protecting Kaname Chidori, a hot-headed Japanese high school girl. Individual chapters are published on Monthly Dragon Magazine, followed by a paperback compilation released by Fujimi Shobo's Fujimi Fantasia Bunko. The novels are split between stories focusing on Sousuke's mission as a soldier of Mithril and comedic side stories centered on his life at Jindai High School. The series has been adapted into different media; including three animated television ... more on Wikipedia

Full Metal Panic! is ranked on...

#117 of 891 People who voted for Full Metal Panic!... also upvote Berserk on The Best Adult Anime of All Time also upvote Attack on Titan on The Best Gore Anime of All Time The Best Anime Series of All Time 5.7M VOTES You love anime but what tops this list of the best anime series ever made? Top anime series include shows like Death Note, A...
#87 of 88 The 30+ Best Shounen Anime Of All Time 567k VOTES Shounen (or "shōnen") is one of the most popular genres of anime. It is geared toward tee...
#155 of 318 The Best English Dubbed Anime of All Time 969.2k VOTES If you're one of those people who only watches anime in Japanese, we don't blame you. English dubs can really ruin a series ...
#99 of 190 The Best Action Anime of All Time 638.7k VOTES Action anime is hard to define, but if a show has car chases and epic battles, then it probably fits the genre's descri...
#98 of 258 The Best Romance Anime Ever Made 817.9k VOTES It's time to get in touch with your emotional side, as we're ranking the top romance anime that has ever been made. These sh...
#9 of 52 The Best Military Anime of All Time 19k VOTES A common theme among popular action anime is that some kind of military force or army is often the driving force behind the ...
#7 of 19 The 20 Best 'B-Tier' Anime That Are Great But Not Amazing 8.7k VOTES Not every anime makes it to the A-tier - meaning, not every anime is a flawless masterpiece that should be on everybody's to...
#21 of 70 The Best Sci-Fi Anime of All Time 62.6k VOTES Sci-fi geeks, we need you now more than ever! This is Ranker's list of the greatest sci-fi anime of all time, and we want ...
#363 of 1,328 The Best Guilty Pleasure TV Shows 19.5k VOTES List of the best guilty pleasure TV shows, past and present, including sitcoms, dramas, reality shows, and game shows. These...
#29 of 31 The Best Anime Like Katanagatari 283 VOTES Want recommendations for more anime like Katanagatari? Everybody loves a good action anime, especially when it falls un...
#13 of 15 The 15 Best Anime Sequels of 2018 571 VOTES If you're a long-time anime fan, one of the most exciting things about each new anime season is finding out which shows are ...
#6 of 23 23 Pretty Good Anime You Can Binge On Hulu Right Now 3.1k VOTES The era of streaming has knocked out industry giants like Blockbusters and paved the way for Netflix and Hulu. Gone are the ...
#2 of 44 All Gonzo Anime, Ranked Best to Worst 4.1k VOTES For this we're taking all of Gonzo's anime and ranking it from best to worst. Formed in 1992, Gonzo is a Japanese anime stud...
#15 of 22 Anime To Look Forward To In 2017 12.3k VOTES A new year definitely means new anime seasons will be coming your way, and 2017 is primed to roll out some huge re...
#18 of 30 The Best Anime Like Kaze No Stigma 1.2k VOTES Need some Kaze No Stigma anime recommendations? Since it's such an influential series, let's rank the best anime l...
#9 of 20 The Best Anime Like Ranma ½ 444 VOTES For Ranma ½ fans looking for more anime similar to the manga and anime's tone, style, concept, and theme, there are a...
#18 of 20 The Best Anime Like Black Cat 375 VOTES In Black Cat, the story revolves around former assassin Train Heartnet and his new life as a Sweeper (or boun...
#13 of 13 The 13 Best Anime Like The Irregular At Magic High School 1.5k VOTES Finding new anime recommendations can be challenging; how are you ever going to properly fill the void that one special seri...
#11 of 13 The Best Anime Like Code Geass 676 VOTES Code Geass is one of the most binge-worthy anime series out there. It has the perfect combination of both political strife, ...
#5 of 13 The Best Terrorist Anime of All Time 646 VOTES List of the best terrorist anime, voted on by Ranker's anime community. This may not be the most popular genre of Japanese a...