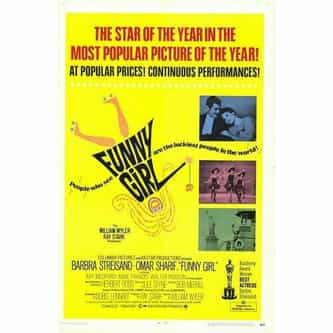 Tagline
People who see FUNNY GIRL are the luckiest people in the world!

Funny Girl, the film, is a 1968 American biographical romantic musical comedy-drama film directed by William Wyler. The screenplay by Isobel Lennart was adapted from her book for the eponymous stage musical. It is loosely based on the life and career of Broadway and film star and comedian Fanny Brice and her stormy relationship with entrepreneur and gambler Nicky Arnstein. Produced by Brice's son-in-law, Ray Stark, with music and lyrics by Jule Styne and Bob Merrill, the film stars Barbra ... more on Wikipedia

391 votes Every Song in Funny Girl, Ranked by Singability

Funny Girl IS LISTED ON