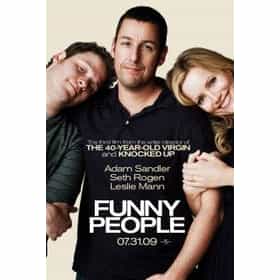 Funny People is a 2009 American comedy-drama film written, produced and directed by Judd Apatow, and starring Adam Sandler, Seth Rogen, and Leslie Mann. The film was released on July 31, 2009 in North America, and on August 28, 2009 in the United Kingdom. It is Apatow's longest film, with its running time being 146 minutes. The film was co-produced by Apatow Productions and Mr. Madison 23 Productions, a subsidiary of Sandler's company Happy Madison. Universal Pictures and Columbia Pictures co-financed the film and the former also served as a worldwide distributor. The film received generally positive reviews, with critics praising the script, the directing and the performances of ... more on Wikipedia

Funny People is ranked on...

Funny People is also found on...