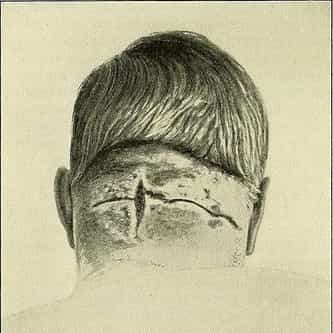 A boil, also called a furuncle, is a deep folliculitis, infection of the hair follicle. It is most commonly caused by infection by the bacterium Staphylococcus aureus, resulting in a painful swollen area on the skin caused by an accumulation of pus and dead tissue. Boils which are expanded are basically pus-filled nodules. Individual boils clustered together are called carbuncles. Most human infections are caused by coagulase-positive S. aureus strains, notable for the bacteria's ability ... more on Wikipedia

Furuncle IS LISTED ON

#66 of 73
19.7k VOTES The Scariest Diseases of All Time
What Causes Rigor? Fever - Diseases With This Symptom What Causes Pyrexia? Risks of Immunosuppression Diseases Treated By Erythromycin