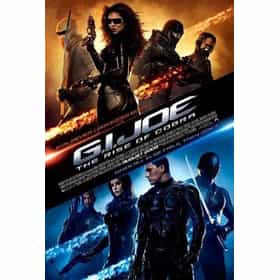 G.I. Joe: The Rise of Cobra

G.I. Joe: The Rise of Cobra is a 2009 American military science fiction action film based on the G.I. Joe toy franchise, with particular inspiration from the comic book and cartoon series G.I. Joe: A Real American Hero. The film is directed by Stephen Sommers, produced by Lorenzo di Bonaventura and co-written by Stuart Beattie, based on a 1998 screenplay by John Paul Kay. G.I. Joe features an ensemble cast based on the various characters of the franchise. The story follows two American soldiers, Duke and Ripcord, who join the G.I. Joe Team.. ... more on Wikipedia