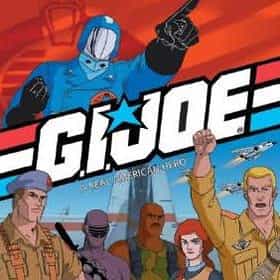 G.I. Joe: A Real American Hero is a half-hour American animated television series based on the successful toyline from Hasbro and the comic book series from Marvel Comics. The cartoon had its beginnings with two five-part mini-series in 1983 and 1984, then became a regular series that ran in syndication from 1985 to 1986. Ron Friedman created the G.I. Joe animated series for television, and wrote all four miniseries. The fourth mini-series was intended to be a feature film, but as noted subsequently was released as a television mini-series instead because of production difficulties. ... more on Wikipedia

22 Cobra Action Figures So Bad They Disgraced the Whole Organization 3.9k votes Cobra may be the only real nemesis to G.I. Joe, but there are a lot of dumb Cobra characters. That means there a lot of dumb...
22 G.I. Joe Action Figures You Wouldn't Want in Your Platoon 4.1k votes With so many Joes, it was inevitable that there would be stupid G.I. Joe action figures. G.I. Joe's tagline for most of the ...
The Most Valuable G.I. Joe Action Figures Of All Time 10.4k views These days, companies like Hasbro put out so many toys, it's rare that one becomes a valuable collectible. It wasn't always ...

#134 of 728 The Best Cartoons of All Time 2.9M VOTES There have been many fantastic animated TV shows throughout the history, but which ones are the best? Some people think that...
#20 of 249 People who voted for G.I. Joe... also upvote Star Wars Franchise on The Greatest Sci-Fi Movies of All Time also upvote Star Wars Franchise on The Most Rewatchable Movies The Best Saturday Morning Cartoons for Mid-'80s — '90s Kids 2.1M VOTES These are the best Saturday morning cartoons from the '80s and '90s. Thankfully, with the advent of the DVD, the DVR, and ev...
#40 of 380 The Best Kids Cartoons of All Time 1.2M VOTES This list contains information about the best kids cartoons, ranked by your votes. Over the years, there have been tons of g...
#81 of 487 People who voted for G.I. Joe... People Age 30 to 49 are 2x more likely to vote for this The Greatest Animated Series Ever Made 620.2k VOTES The top animated series of all time include some of the best TV shows ever to flicker in your living room (or on your comput...
#10 of 111 The Most Unforgettable '80s Cartoons 159.7k VOTES Get ready to feel some serious nostalgia after reading through this list of the top 80s cartoons. Let's face it. The best ca...
#652 of 1,176 The Greatest TV Shows Of All Time 1.4M VOTES Choosing the best TV shows of all time means taking into account the best TV dramas, the best TV comedies, the best cartoons...
#230 of 281 The Best Cult TV Shows of All Time 217.9k VOTES List of the best cult TV shows ever, ranked by their loyal fans. TV series that develop cult followings are known for their ...
#26 of 70 The Best Superhero Teams & Groups 81.8k VOTES Who are the best superhero teams ever? With so many potential choices, it can be hard to decide. This list includes favorite...
#167 of 594 The Best TV Theme Songs of All Time 317.8k VOTES The best TV theme songs and TV intros of all time will take you back to some of the greatest moments in TV. Television theme...
#85 of 238 The Greatest Cartoon Theme Songs of All Time 160.3k VOTES For entire generations of kids, some of their most fond memories are of watching Saturday morning cartoons. The animated sho...
#2 of 49 The Most Nostalgia-Inducing '80s Toys 52.8k VOTES The 1980's was a great decade for toys and entertainment. Everything was bright, loud, neon, and totally fun. Even years lat...
#10 of 25 The Best 80s Cartoon Theme Songs 13.2k VOTES If you're a child of the 80s, you’re well aware of how many hit TV cartoons there were! Who doesn’t remember Saturday mornin...
#3 of 28 The Best Toy Commercials of the 80s 1.9k VOTES The 1980's were a far different time for toys and toy commercials. The commercial meant everything. There was no Tivo or int...
#112 of 510 The Best '80s TV Shows 198.3k VOTES List of the best television shows from the '80s, as ranked by television fans. In the 1980s, sitcoms were among the most tal...
#48 of 134 The Best Cartoon Series TV Shows 39.1k VOTES The very best cartoon series shows on television, ranked from best to worst. This list of the greatest cartoon series shows ...
#2 of 37 The Best TV Shows Based on Toys 1.1k VOTES Back in the 1980s, it seemed that no new cartoon could hit the Saturday morning lineup without first having a toy line to ba...
#12 of 502 The Best Television Syndication TV Shows 4.1k VOTES List of popular Television syndication shows, ranked from best to worst. This list of the top current and cancelled Televisi...
#24 of 50 The Best Action TV Shows For Kids Ever Made 564 VOTES Kids action shows can spark the imagination. A single series can make children believe they can grow up to be globe-trotting...
#5 of 11 The Best G.I. Joe Films & Series Ever Made 43 VOTES Since the first-ever G.I. Joe TV series debuted in 1985 based off the Hasbro action figure that made its way into ...
#5 of 14 The Best 1980s Military TV Shows 496 VOTES The best 1980s military TV shows come in many forms. Some top '80s military series are dramas, and other good 1980s military...
Time Magazine: Person Of The Year 8.5k VIEWS In 1927, a magazine came up with the 'Person of the year' title. It was by TIME magazine that has been a pioneer since when ...