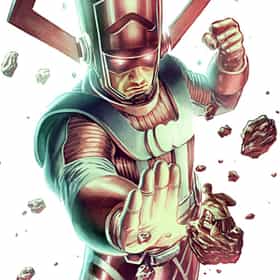 Galactus is a fictional cosmic entity appearing in American comic books published by Marvel Comics. In his first appearance in The Fantastic Four, Galactus was depicted as a god-like figure who feeds by draining living planets of their energy. After debuting in the Silver Age of Comic Books, Galactus has played a role in over four decades of Marvel continuity. The character has been featured in other Marvel products, such as arcade games, video games, animated television series, action figures, trading cards and the 2007 film Fantastic Four: Rise of the Silver Surfer. In 2009, Galactus ranked 5th on IGN's list of "Top 100 Comic Book Villains". ... more on Wikipedia

Galactus is ranked on...

#4 of 109 People who voted for Galactus... also upvote Silver Surfer on The Best Comic Book Superheroes of All Time also upvote Silver Surfer on The Top Marvel Comics Superheroes The Greatest Marvel Villains & Enemies Ever 410.6k VOTES The best Marvel villains are the men and women (not to mention any aliens, robots, and even siblings of heroes) at the root ...
#20 of 644 People who voted for Galactus... People over 50 are 2x more likely to vote for this also upvote Thanos on The Greatest Marvel Villains & Enemies Ever The Best Comic Book Villains 274.8k VOTES Who are the best comic book villains of all time? This list of top supervillains in comics includes some of the most notorio...
#2 of 45 The Best Fantastic Four Villains Ever 5.4k VOTES List of the most notorious Fantastic Four adversaries, ranked by the fans. Created by Stan Lee and Jack Kirby way back in 19...
#7 of 15 15 Comic Book Villains With Horrifying And Heartbreaking Origin Stories 18.9k VOTES Comic villains are responsible for some of the most heinous acts in all of fiction. They commit the sorts of graphic cr...
#44 of 56 People who voted for Galactus... Men are 3x more likely to vote for this People in the Northeast are 2x more likely to vote for this Characters Who Are Most Worthy Of Lifting Mjolnir 215.3k VOTES Not just anyone can lift Thor's hammer. Thanks to an enchantment by Odin, only one who is worthy can wield it. While wo...
#4 of 105 Comic Book Characters We Want to See on Film 134.6k VOTES   Certain comic book characters definitely lend themselves to film better than others. Sometimes it's their costume...
#28 of 42 The Best Iron Man Villains Ever 10.1k VOTES List of the most notorious villains from Iron Man's rogues gallery, as ranked by the fans. Iron Man/Tony Stark has a wide ar...
#8 of 56 The Best Thor Villains, Foes, and Enemies of All Time 15.1k VOTES The God of Thunder, Thor, was created way back in 1962 by the comic legends Stan Lee, Larry Lieber, and Jack Kirby. With ove...
#10 of 52 The Most Powerful Characters in Marvel Comics 450.5k VOTES "Strength" in comic books is hard to qualify, or quantify. One character always has to be stronger than another or...
#5 of 80 The Greatest Avengers Villains of All Time 66.1k VOTES The Hulk, Iron Man, and Thor had been fighting crime separately in the pages of Marvel Comics, each having their own share o...
#13 of 15 15 Pictures That Put The Enormous Marvel Characters In Perspective 8k VOTES The Marvel universe constantly reaches new heights, in both the figurative and literal senses. While Marvel’s worl...
List of All Hulk Villains & Enemies 129.9k VIEWS This is a full list of all Hulk enemies and supervillains that has ever existed. The following Hulk enemy list can be sorted...
15 Of The Biggest Characters In Comic Books, Ranked From Smallest To Largest 150.7k VIEWS There are some pretty frickin' huge comic book characters. Some are the size of planets, some are bigger than planets, and s...
The Complete List of All Fantastic Four Villains and Enemies 36.4k VIEWS Whether out in space or down here on Earth, the Fantastic Four have our backs, even up against baddies like Mole Man and eve...
Captain America's Enemies 53.4k VIEWS Marvel Comics's Captain America (Steve Rogers) has been fighting off bad guys since World War II. Here is a full list of all...

Galactus is also found on...