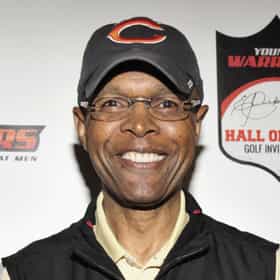 Gale Eugene Sayers (born May 30, 1943) is an American former professional football player who earned acclaim both as a halfback and return specialist in the National Football League (NFL). In a brief but highly productive NFL career, Sayers spent seven seasons with the Chicago Bears from 1965 to 1971, though multiple injuries effectively limited him to five seasons of play. He was known for his elusiveness and agility, and was regarded by his peers as one of the most difficult players to tackle. Nicknamed the "Kansas Comet", Sayers played college football for the Kansas Jayhawks football team of the University of Kansas, where he compiled 4,020 all-purpose yards over three ... more on Wikipedia

Gale Sayers is ranked on...

Gale Sayers is also found on...