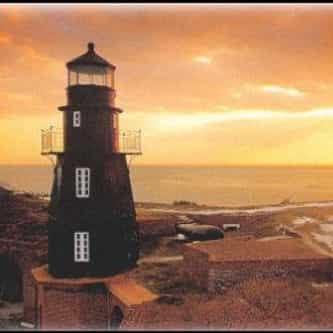 The Garden Key Light, also known as the Tortuga Harbor Light, is located at Fort Jefferson, on Garden Key in the Dry Tortugas, Florida. The first lighthouse, started in 1824 and first lit in 1826, was a brick conical tower. The lighthouse and its outbuildings were the only structures on Garden Key until construction started on Fort Jefferson in 1846. Construction continued until 1861, but the fort was never completed. In 1858 the Dry Tortugas lighthouse was built on a nearby island, and ... more on Wikipedia

Garden Key Light IS LISTED ON