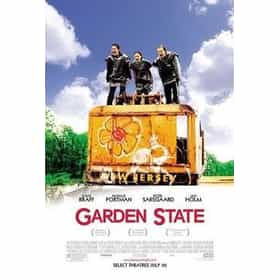 Garden State is a 2004 comedy-drama film written and directed by Zach Braff and starring Natalie Portman, Peter Sarsgaard, Ian Holm and Braff himself. The film centers on Andrew Largeman, a 26-year-old actor/waiter who returns to his hometown in New Jersey. Braff based the film on his real life experiences. It was filmed in April and May 2003 and released on July 28, 2004. New Jersey was the main setting and primary shooting location. Garden State received positive reviews upon its release and has garnered a cult following. ... more on Wikipedia

Garden State is ranked on...

Garden State is also found on...