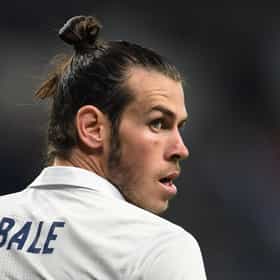 Gareth Frank Bale (born 16 July 1989) is a Welsh professional footballer who plays as a winger for Spanish club Real Madrid and the Wales national team. Renowned for his ball striking from distance, swerving free kicks, and his ability to get past defenders with pace, Bale has received plaudits from his peers, who have described him as a footballer with "tremendous speed, great crossing ability, a great left foot and exceptional physical qualities". He began his professional career at Southampton, playing at left-back and earning acclaim as a free kick specialist. Bale moved to Tottenham Hotspur in 2007, for an eventual £7 million fee. During his time at Tottenham, ... more on Wikipedia

Gareth Bale is ranked on...

Gareth Bale is also found on...