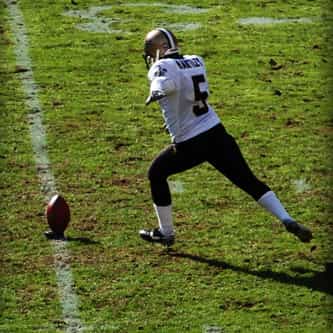 Garrett Hartley (born May 16, 1986) is a former American football placekicker. He was signed by the Denver Broncos as an undrafted free agent in 2008. Later that year he became the placekicker for the New Orleans Saints, for whom he set an NFL record (now surpassed) for most consecutive successful field goals to start a career, and then became the first kicker in NFL history to convert three field goals of more than 40 yards in the Super Bowl. He played college football at Oklahoma. ... more on Wikipedia

Garrett Hartley IS LISTED ON