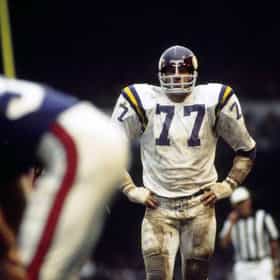 Gary Larsen (born March 13, 1942) is a former defensive tackle in the NFL and played college football at Concordia College, Moorhead, Minnesota. He started his NFL career in 1964 with the Los Angeles Rams and then became a part of the famous Purple People Eaters for the Minnesota Vikings from 1965 through 1974. He was selected to two Pro Bowls and played in Super Bowls IV, VIII and IX. He was known as the "policeman", the player who covered the run while Eller, Marshall, and Page attacked the quarterback. According to Minnesota Viking records, he recorded 38.5 sacks in his 11-year career. ... more on Wikipedia

Gary Larsen is ranked on...

Gary Larsen is also found on...