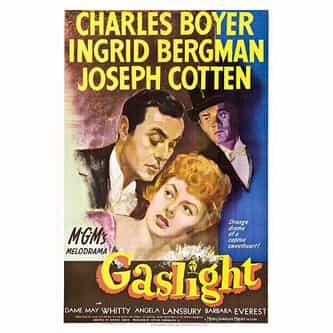 Gaslight is an American 1944 mystery-thriller film adapted from Patrick Hamilton's 1938 play Gas Light. It was the second version to be filmed, following the British film Gaslight, directed by Thorold Dickinson and released in 1940. This 1944 version was directed by George Cukor and starred Ingrid Bergman, Charles Boyer, Joseph Cotten, and 18-year-old Angela Lansbury in her screen debut. It had a larger scale and budget than the earlier film, and lends a different feel to the material. To ... more on Wikipedia

Gaslight IS LISTED ON