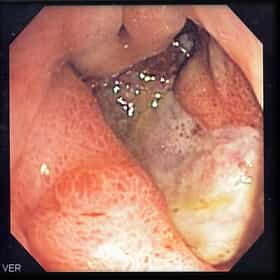 Gastritis is inflammation of the lining of the stomach. It may occur as a short episode or may be of a long duration. The most common symptom is upper abdominal pain. Other symptoms include nausea and vomiting, bloating, loss of appetite, and heart burn. Others may have no symptoms. Complications may include bleeding, stomach ulcers, and stomach tumors. When due to autoimmune problems, low red blood cells due to not enough vitamin B12 may occur, a condition known as pernicious anemia. Common causes include infection with Helicobacter pylori and NSAIDs. Less common causes include alcohol, smoking, cocaine, severe illness, autoimmune problems, radiation therapy, and Crohn disease among ... more on Wikipedia

Gastritis is also found on...