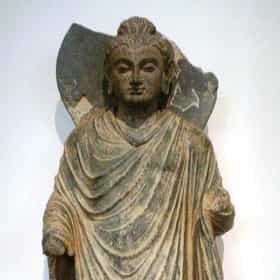 Siddhārtha Gautama (Sanskrit: सिद्धार्थ गौतम Siddhāṛtha Gautama, c. 563/480 – c. 483/400 BCE) or Siddhattha Gotama (शिद्धत्थ गोतम) in Pali, also called the Gautama Buddha, the Shakyamuni (i.e. "Sage of the Shakyas") Buddha, or simply the Buddha, after the title of Buddha, was a monk (śramaṇa), mendicant, sage, philosopher, teacher and religious leader on whose teachings Buddhism was founded. He is believed to have lived and taught mostly in the northeastern part of ancient India sometime between the 6th and 4th centuries BCE.Gautama taught a Middle Way between sensual indulgence and the severe asceticism found in the śramaṇa movement common in his region. He later taught ... more on Wikipedia

Buddha is ranked on...

#193 of 931 People We Wish Were Still Alive 3.2M VOTES RIP to our world's greatest achievers, those who changed the way we live and the ways we thought. This list of people we wis...
#26 of 2,831 The Most Influential People of All Time 2.4M VOTES This is a list of the most influential people of all of human history. This means that the individuals on this list have had...
#56 of 1,472 The Greatest Minds of All Time 736.3k VOTES List of the Greatest Minds of All Time, throughout history. This list represents the most influential thinkers across variou...
#305 of 527 Famous Men You'd Want to Have a Beer With 1.8M VOTES If given the opportunity to sit down for a beer with any famous male figure, which famous men would you most want to get a d...
#19 of 474 Famous Role Models We'd Like to Meet In Person 531k VOTES These are the famous folks it would be most exciting to meet in person, as ranked by the wisdom of the crowd. Some of the be...
#62 of 379 The Most Important Leaders In World History 941.1k VOTES For good or for bad, our leaders can be powerful forces for change in the world. But who are the most impaction people to ev...
#19 of 100 Historical Figures You Most Want to Bring Back from the Dead 142.8k VOTES Throughout the course of history, the human race has produced some truly remarkable individuals - individuals who, sadly, ha...
#40 of 87 People Who Made the World a Better Place 57k VOTES This is a list of famous people who helped heal the world. Some people have been acknowledged for their efforts with No...
22 Historical Figures With Preserved Body Parts You Can Still Visit Today 262.6k VIEWS Important people from history left behind art, innovative ideas, political change - and, on occasion, body parts. ...
Historical Geniuses And Nerds You Never Knew Were Misogynistic Jerks 18.1k VIEWS You can be the smartest, most intelligent, groundbreaking genius and still be a trash human. Just because someone has been g...
104 Celebrities Who Have Entire Species Named After Them 62.4k VIEWS A list of organisms, including animals as well as plants, bacteria, etc., named for celebrities and other famous people (but...

Buddha is also found on...