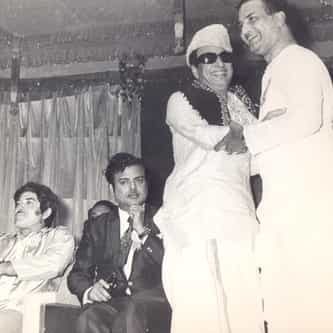 Ramasamy Ganesan (16 November 1919 – 21 March 2005), better known by his stage name Gemini Ganesan, was an Indian film actor who worked mainly in Tamil cinema. He was nicknamed "Kadhal Mannan" (King of Romance) for the romantic roles he played in films. Ganesan was one the "three biggest names of Tamil cinema", the other two being M. G. Ramachandran (known by his initials as MGR) and Sivaji Ganesan. While Sivaji Ganesan excelled in films with drama, and MGR dominated ... more on Wikipedia