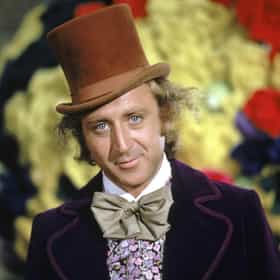 Jerome Silberman (June 11, 1933 – August 29, 2016), known professionally as Gene Wilder, was an American actor, screenwriter, director, producer, singer-songwriter and author. Wilder began his career on stage, and made his screen debut in an episode of the TV series The Play of the Week in 1961. Although his first film role was portraying a hostage in the 1967 motion picture Bonnie and Clyde, Wilder's first major role was as Leopold Bloom in the 1967 film The Producers for which he was nominated for an Academy Award for Best Supporting Actor. This was the first in a series of collaborations with writer/director Mel Brooks, including 1974's Blazing Saddles and Young Frankenstein, which ... more on Wikipedia

The 25+ Best Gene Wilder Movies of All Time, Ranked 5.2k votes The best Gene Wilder movies often succeed at bringing the emotion and comedy, as he was one of the best comedic actors of ...

Gene Wilder is ranked on...

#25 of 926 People We Wish Were Still Alive 3.3M VOTES RIP to our world's greatest achievers, those who changed the way we live and the ways we thought. This list of people we wis...
#28 of 1,148 The Best Actors in Film History 2.2M VOTES The best actors ever are ranked here in this list of the best actors in film history. These are the greatest actors ever to ...
#81 of 351 The Greatest Entertainers of All Time 121.4k VOTES When it comes to the greatest entertainers of all time, we're truly blessed to live in an age where technology allows u...
#22 of 329 The Greatest Actors Who Have Never Won an Oscar (for Acting) 462k VOTES There are many actors who haven't won an Oscar. For 95 percent of the acting population, there is probably a good reason the...
#6 of 50 Who's The Best Actor From Every State? 25.8k VOTES No matter what part of the US you're from, you can brag about the famous people who grew up in your state. If you're no...
#2 of 161 These Big-Name Celebs Have Been Hiding Their Real Names 99.8k VOTES List of real names of celebrities, including actors, singers, wrestlers, and even politicians. Many actors and actresses use...
#1 of 41 Comedians Who Use Stage Names 1.2k VOTES These comedians knew that it's tough to make a name in comedy and that literally making themselves a stage name was the best...
#98 of 160 Celebrity Death Pool 2013 15.4k VOTES Every year we lose more and more famous celebrities. Whether it's from natural causes, suicide, drug abuse or just plain cra...
Celebrities You Didn't Know Use Stage Names 1.8M VIEWS List of celebrities with stage names, loosely ranked according to fame and popularity. It's tough to break into show busin...
Celebrities Who Were In The Military 7.7M VIEWS The many celebrities who were in the military signed up to make the ultimate sacrifice for their countries. Through the year...
Famous People Named Gene 12.5k VIEWS List of famous people named Gene, along with photos. How many celebrities named Gene can you think of? The famous Genes belo...
The Most Famous Actors of the 70s (Then and Now) 842.8k VIEWS Some Hollywood careers last only a few months, others can span decades. The actors on this then and now list are some of the...
Actors and Actresses Who Died in 2016 778.2k VIEWS   Car accidents, drug overdoses, and other surprising deaths make up the bulk of the actors and actresses who died to...
Actors Who Played Multiple Roles in the Same Film 76.7k VIEWS Several famous actors and actresses have played different characters in the same movie. Sometimes actors play characters who...
Celebrities Who Have Been Married 4 (or More!) Times 1.1M VIEWS Famous people seem to have a knack for binge marrying. Divorces and weddings come and go with such frequency that it can bec...
Actors in the Most Mel Brooks Movies 4.2k VIEWS Mel Brooks has directed some of the funniest movies of all time. He has also worked with several hilarious actors and actres...

Gene Wilder is also found on...