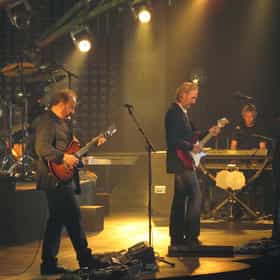 Genesis were an English rock band formed at Charterhouse School, Godalming, Surrey, in 1967. The most successful and longest-lasting line-up consisted of keyboardist Tony Banks, bassist/guitarist Mike Rutherford and drummer/singer Phil Collins. Significant former members were original lead singer Peter Gabriel, original lead guitarist Anthony Phillips, and second lead guitarist Steve Hackett. The band moved from folk music to progressive rock in the 1970s, before moving towards pop at the end of the decade. They have sold 21.5 million copies of their albums in the United States, with worldwide sales of between 100 million and 150 million. Formed by five Charterhouse pupils including ... more on Wikipedia

The Best Genesis Albums of All Time 5k votes Genesis are considered by many one of the best prog rock bands of all time. List of the best Genesis albums, including pictu...

Genesis is ranked on...

#44 of 2,211 People who voted for Genesis... also upvote Alien Franchise on The Best Movies of All Time also upvote The Dark Side of the Moon on The Greatest Albums of All Time The Best Rock Bands of All Time 3.3M VOTES Update: Follow Ranker's official New Rock 2020 playlist on Spotify! There are thousands of rock bands that have ...
#34 of 2,175 People who voted for Genesis... People over 50 are 2x more likely to vote for this The Greatest Musical Artists of All Time 13.4M VOTES When VH1 polled fellow artists to name the greatest artists of all time, it seemed like a good idea---but in reality, the li...
#42 of 620 The Greatest Live Bands of All Time 333.2k VOTES List of the greatest live bands or artists of all time, created and ranked by music fans worldwide asks the question "w...
#77 of 464 The Best Current Pop Groups/Singers 475.9k VOTES A list of the best current pop groups and singers who are making some of the best pop songs of 2019. The battle between...
#77 of 277 Rank the Rock N Roll Hall of Fame Inductees 310.5k VOTES Update: Follow Ranker's official New Rock 2020 playlist on Spotify! A complete list of bands and artists inducte...
#18 of 133 Bands Or Artists With Five Great Albums 27.8k VOTES Building a successful band is tough but keeping it going is much tougher. Even some of history's biggest, best-selling ...
#115 of 409 The Greatest Musical Artists of the '90s 1M VOTES   Take a big whiff- "mmmbop", it smells like the '90s in here! An incredibly eclectic decade for music, the...
#6 of 66 The Best Bands Named After Books and Literary Characters 11k VOTES The best bands that are named after books span the music world with offerings from music genres like indie rock, classic roc...
#3 of 318 The Best Progressive Rock Bands/Artists 164.3k VOTES Loved by many and hated by some, progressive rock - or prog rock - is one of the most popular subgenres of rock music. Meldi...
#14 of 409 The Best British Rock Bands/Artists 285.1k VOTES Of all the important rock bands to grace the stage, British bands are considered by many to be the most important and most i...
#1 of 114 The Best Art Rock Bands & Artists of All Time 70.1k VOTES Fusing influences ranging as far as experimental rock and classical music, art rock is a form of music where the best musici...
#33 of 118 The Best Experimental Rock Bands/Artists 8.3k VOTES Similarly to avant-garde rock and avant-garde rock bands, experimental rock takes rock music and takes it to places where ma...
#16 of 76 The Best Rock Opera Bands/Artists 4.3k VOTES Rock opera artists list, with photos, ranked best to worst by votes. List of good rock opera bands includes a filter so you ...
#2 of 91 The Best Symphonic Rock Bands 33.2k VOTES Symphonic rock is often times confused with progressive rock and with good reasons. Many of the best symphonic rock overlap ...
#49 of 57 The Best Blue-eyed Soul Artists 2k VOTES With the popularity of soul music in the 1960s that came primarily from African-American singers, there was an offshoot call...

Genesis is also found on...