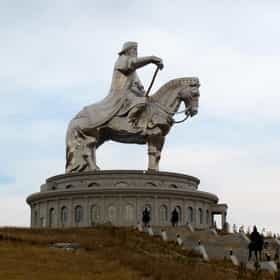 Genghis Khan (born Temüjin, c. 1162 – August 18, 1227) was the founder and first Great Khan of the Mongol Empire, which became the largest contiguous empire in history after his death. He came to power by uniting many of the nomadic tribes of Northeast Asia. After founding the Empire and being proclaimed Genghis Khan, he launched the Mongol invasions that conquered most of Eurasia. Campaigns initiated in his lifetime include those against the Qara Khitai, Caucasus, and Khwarazmian, Western Xia and Jin dynasties. These campaigns were often accompanied by large-scale massacres of the civilian populations – especially in the Khwarazmian and Western Xia controlled lands. By the end of ... more on Wikipedia

Genghis Khan is ranked on...

#25 of 2,836 The Most Influential People of All Time 2.4M VOTES This is a list of the most influential people of all of human history. This means that the individuals on this list have had...
#2 of 16 Historical Leaders Called 'The Great,' Ranked By Greatness 309 VOTES They don't hand out nicknames like "the Great" to just anyone. History has seen its share of the Greats, with the ...
#3 of 411 The Most Important Military Leaders in World History 112.5k VOTES Military history has a few figures who didn't just win battles or campaigns, but changed the world and the destiny of their ...
#314 of 1,472 The Greatest Minds of All Time 735.5k VOTES List of the Greatest Minds of All Time, throughout history. This list represents the most influential thinkers across variou...
#12 of 14 Who Was The Most Self-Indulgent Royal In History? 2.7k VOTES Fountains that ran with alcohol instead of water. Gold chamber pots. An 800-car garage. The most decadent royals in history ...
#33 of 380 The Most Important Leaders in World History 939.6k VOTES For good or for bad, our leaders can be powerful forces for change in the world. But who are the most impaction people to ev...
#1 of 16 The Most Brutal Medieval Monarchs 9.9k VOTES It's no secret that the word "medieval" evokes negative images, but in the case of these Middle Ages monarchs, tho...
#2 of 30 The 30 Biggest Badasses In History 20.1k VOTES When you think of the biggest badasses in history, who comes to mind? Rambo, Stone-cold Steve Austin, maybe even t...
#6 of 8 What Historical Figure Would You Bet On In A Poker Game? 1.4k VOTES Because there's nothing better for you to do at work today (besides play online poker), now seems like the perfect time to d...
Historians Reveal History's Best Kept Secrets 167.3k VIEWS Though people pretend it's written in stone, history features tons of famous mysteries - many of which remain unso...
The Cruelest Rulers in History (Who Weren't Hitler) 121.5k VIEWS When we think of the evilest rulers in history, names like Adolf Hitler, Joseph Stalin, and Benito Mussolini rush to mind. B...
Historical Figures Who Are Consistently Misrepresented In Pop Culture 5k VIEWS It's no secret that Hollywood takes liberties when presenting historical figures on screen. Biopics like Marie Antoinet...
Famous People Whose Last Name Is Khan 14.6k VIEWS Being a fairly common name, it's no surprise there are a lot of famous people with the last name Khan. Do you recognize all ...
What Historic Military Leader Would You Be Based On Your Zodiac? 2.9k VIEWS We do not live in a time of clashing armies and grand military strategies. These days, generals use sophisticated technology...
World Leaders With The Most Children 12.4k VIEWS Men in power have always loved getting married or taking mistresses in order to have plenty of heirs, but who are the r...