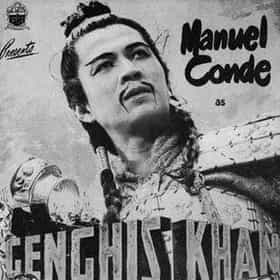 Genghis Khan is a 1965 film depicting the life and conquests of the Mongol emperor Genghis Khan. It was released in the United Kingdom and the United States in 1965 by Columbia Pictures, it was directed by Henry Levin and featured Omar Sharif, who that same year starred in another epic, Doctor Zhivago. The film also included James Mason, Stephen Boyd, Robert Morley, Françoise Dorléac and Telly Savalas. A 70 mm version of the film was released by CCC Film in West Germany. It was filmed in Yugoslavia. ... more on Wikipedia

Genghis Khan is ranked on...

Genghis Khan is also found on...