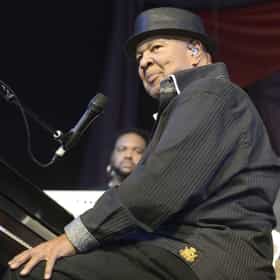 George M. Duke (January 12, 1946 – August 5, 2013) was an American keyboardist, composer, singer-songwriter and record producer. He worked with numerous artists as arranger, music director, writer and co-writer, record producer and as a professor of music. He first made a name for himself with the album The Jean-Luc Ponty Experience with the George Duke Trio. He was known primarily for thirty-odd solo albums, of which A Brazilian Love Affair from 1979 was his most popular, as well as for his collaborations with other musicians, particularly Frank Zappa. ... more on Wikipedia

George Duke is ranked on...

#62 of 164 The Greatest Jazz Pianists of All Time 77.8k VOTES Imagine dancing to the sound of smooth, vibrant jazz music with a pianist pounding on the keys with all his might accompanie...
#44 of 106 The Greatest Organists in Rock and Jazz History 5.5k VOTES Similar to the harpsichord and piano, but more grand and beautiful, the organ can create a louder, richer sound with a deep ...
#32 of 110 People who voted for George Duke... are 4x more likely to vote for Jordan Rudess on this list are 11x more likely to vote for Keith Emerson on this list The Greatest Keytarists of All Time 45.4k VOTES Who are the world’s greatest keytarists? Playing an instrument that isn’t as common as one like the piano, guitar, drums, or...
#1 of 58 The Best Jazz-Funk Bands/Artists 4k VOTES While there are many fantastic jazz-funk artists, some are just better than others. This list is designed to let the fans of...
#36 of 132 The Best Funk Bands/Artists 18.2k VOTES This funk bands list ranks the best funk artists and musicians by votes. This list of top funk groups let’s you see who fu...
#21 of 31 The Best Crossover Jazz Artists 219 VOTES Crossover jazz artists list, with photos, ranked best to worst by votes. List of good crossover jazz bands includes a filter...

George Duke is also found on...