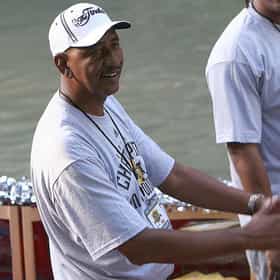 George Gervin (born April 27, 1952), nicknamed "The Iceman", is an American retired professional basketball player who played in both the American Basketball Association (ABA) and National Basketball Association (NBA) for the Virginia Squires, San Antonio Spurs, and Chicago Bulls. Gervin averaged at least 14 points per game in all 14 of his ABA and NBA seasons, and finished with an NBA career average of 26.2 points per game. In 1996, Gervin was named as one of the 50 Greatest Players in NBA History. ... more on Wikipedia

George Gervin is ranked on...

George Gervin is also found on...