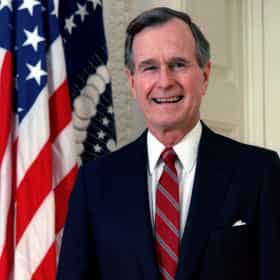 George Herbert Walker Bush (June 12, 1924 – November 30, 2018) was an American politician and businessman who served as the 41st president of the United States from 1989 to 1993 and the 43rd vice president from 1981 to 1989. A member of the Republican Party, Bush also served in the U.S. House of Representatives, as U.S. Ambassador to the United Nations, and as Director of Central Intelligence. Until his son George W. Bush became the 43rd president in 2001, he was usually known as George Bush. Bush postponed his university studies after the attack on Pearl Harbor on December 7, 1941, enlisted in the Navy on his 18th birthday, and became one of its youngest aviators. He served until ... more on Wikipedia

Intimate Behind-The-Scenes Photos Of The Bush Family Like You've Never Seen Them Before 6.4k votes On November 30, 2018, George H.W. Bush passed away at 94; he was the oldest living former United States president. While the...