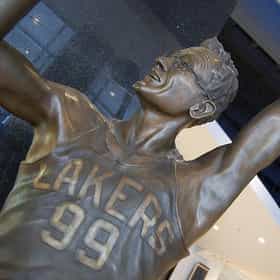 George Lawrence Mikan Jr. (June 18, 1924 – June 1, 2005), nicknamed Mr. Basketball, was an American professional basketball player for the Chicago American Gears of the National Basketball League (NBL) and the Minneapolis Lakers of the NBL, the Basketball Association of America (BAA) and the National Basketball Association (NBA). Invariably playing with thick, round spectacles, the 6 ft 10 in (2.08 m), 245 lb (111 kg) Mikan is seen as one of the pioneers of professional basketball, redefining it as a game of so-called big men with his prolific rebounding, shot blocking, and his talent to shoot over smaller defenders with his ambidextrous hook shot, the result of his namesake Mikan ... more on Wikipedia

George Mikan is ranked on...

George Mikan is also found on...