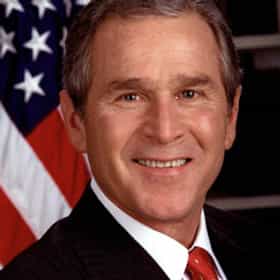 George Walker Bush (born July 6, 1946) is an American politician and businessman who served as the 43rd president of the United States from 2001 to 2009. He had previously served as the 46th governor of Texas from 1995 to 2000. Bush is the eldest son of Barbara and George H. W. Bush, the 41st president of the United States, and is the second president to so follow in his father’s footsteps, the first being John Quincy Adams. After graduating from Yale University in 1968 and Harvard Business School in 1975, he worked in the oil industry. Bush married Laura Welch in 1977 and unsuccessfully ran for the U.S. House of Representatives shortly thereafter. He later co-owned the Texas Rangers ... more on Wikipedia

All 33 George W. Bush Original Paintings That Were Made Public 30.1k votes Post-presidency, George W. Bush has been busy. Painting. In 2017, he even released a book of portraits entitled Portraits of...
Bush-isms: Funny George Bush Quotes 6.9k votes Serving eight years as President of the United States of America, George W. Bush brought us plenty of laughs with his many f...

George W. Bush is ranked on...