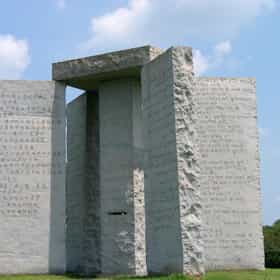 The Georgia Guidestones is a granite monument erected in 1980 in Elbert County, Georgia, in the United States. A set of ten guidelines is inscribed on the structure in eight modern languages, and a shorter message is inscribed at the top of the structure in four ancient language scripts: Babylonian, Classical Greek, Sanskrit, and Egyptian hieroglyphs. The monument stands at the highest point in Elbert County, about 90 miles east of Atlanta, 45 miles from Athens, and 9 miles north of the center of Elberton. The stones are visible from Georgia Highway 77 and are reached by turning east on Guidestones Road. The structure is sometimes referred to as an "American Stonehenge". The ... more on Wikipedia

Georgia Guidestones is ranked on...

#36 of 105 The Conspiracy Theories You Believe Are True 640.9k VOTES Everyone believes at least one of these. Probably. Maybe that's just a theory I have. Of this list of widely-known conspirac...
#3 of 18 The Weirdest Monuments In The United States That You Can Visit 2.2k VOTES America can be a very strange place. There seems to be no end to what we'll memorialize, whether it's our beautiful national...
Scary Conspiracy Theories About Population Control 306.6k VIEWS Conspiracy theories regarding global depopulation and population control have become extremely popular in the last decade. W...