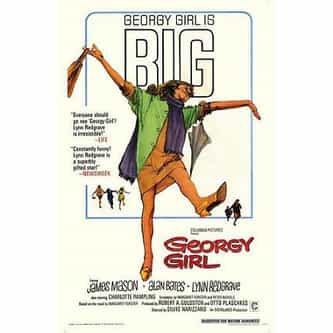 Georgy Girl is a 1966 British film based on a novel by Margaret Forster. The film was directed by Silvio Narizzano and starred Lynn Redgrave as Georgy, Charlotte Rampling, Alan Bates, and James Mason. The movie also features the well known title song performed by the Seekers. The plot follows the story of a virginal woman in 1960s London who is faced with a dilemma when pursued by both her father's older employer and the young lover of her promiscuous and pregnant roommate. ... more on Wikipedia

Georgy Girl IS LISTED ON