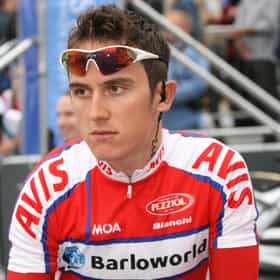 Geraint Howell Thomas, (Welsh pronunciation: [ˈɡɛraint]; born 25 May 1986) is a Welsh professional racing cyclist, who currently rides for UCI WorldTeam Team Ineos, Wales and Great Britain, competing on both track and road. On the track, he has won three World Championships (2007, 2008, and 2012), and two Olympic gold medals (2008 and 2012), while on the road he won the 2018 Tour de France. Thomas's early successes were in track cycling, in which he was a specialist in the team pursuit. He won three world championships and was Olympic gold medallist twice, in 2008 and 2012. Thomas had an early win on the road at the 2004 Paris–Roubaix Juniors and later had a senior victory at the 2010 ... more on Wikipedia

Geraint Thomas is ranked on...

#20 of 84 The Best Olympic Athletes in Track Cycling 814 VOTES List of the best track cycling Olympic athletes of all time, with photos of the athletes when available. The famous track cy...

Geraint Thomas is also found on...