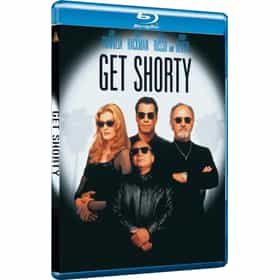 Get Shorty is a 1995 comedy-thriller film based on Elmore Leonard's novel of the same name. Directed by Barry Sonnenfeld and starring John Travolta, Gene Hackman, Rene Russo, and Danny DeVito, the plot remained true to the book except for a few minor details. The sequel Be Cool began production in 2003 and was released in 2005. It was based on the novel of the same name published in 1999. Two of the Get Shorty cast members, Dennis Farina and James Gandolfini, along with author Elmore Leonard all died within months of each other in 2013. ... more on Wikipedia

Get Shorty is ranked on...

#60 of 113 The Best Mafia Films 103.5k VOTES The mafia has been a source of some of the best stories in film history for filmmakers. The drama, action, and moral dilemma...
#32 of 130 The Best Movies of 1995 14.4k VOTES A list of the best movies of 1995, from children's movies like Toy Story to gritty dramas like Kids. The '90s were a decade ...
#24 of 327 The Best Free Movies On YouTube, Ranked 11.2k VOTES Looking for full-length movies on YouTube? Here over 100 free movies on YouTube that you can watch right now. The free full-...
#21 of 24 What to Watch If You Love Pulp Fiction 795 VOTES Pulp Fiction is truly unique with its non-linear storytelling and highly quotable dialog, but there are plenty of&...
#167 of 212 The Best R-Rated Thriller Movies 3.4k VOTES List of R-Rated thriller movies, ranked from best to worst with movie trailers when available. This list takes the best R-Ra...
#87 of 197 The Best R-Rated Comedies 11k VOTES List of R-Rated comedies, ranked from best to worst with movie trailers when available. These comedies are all R-Rated, so i...
#21 of 45 The Best Comedic Thriller Movies, Ranked 913 VOTES This list contains information on the best comedic thriller movies, ranked from best to worst by user votes. The best comedi...
#5 of 78 The Best Danny DeVito Movies of All Time, Ranked 1.9k VOTES Arguing about which is the best Danny DeVito movie of all time? This crowdranked list will help you settle that debate once ...
#15 of 100 Movies Turning 25 In 2020 1.3k VOTES How well do you remember the movies that came out in 1995? We're willing to bet you have very fond memories of that year's m...
#3 of 42 The Best James Gandolfini Movies 581 VOTES List of the best James Gandolfini movies, ranked best to worst with movie trailers when available. James Gandolfini's highes...
#1 of 20 The Best Movies Based On Elmore Leonard Books 65 VOTES American novelist Elmore Leonard may have got his literary career started in the western genre, but he went on to be on...
#29 of 35 The Best Comedy Movies Set in Los Angeles 155 VOTES The best comedic movies about Los Angeles are almost guaranteed to get you laughing. The city has lots of comedy fodder, tha...

Get Shorty is also found on...