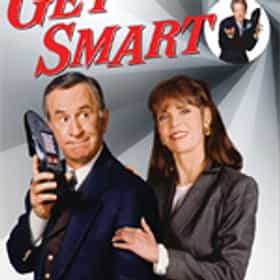 Get Smart is an American comedy television series that satirizes the secret agent genre. Created by Mel Brooks with Buck Henry, the show stars Don Adams, Barbara Feldon, and Edward Platt. Henry said they created the show by request of Daniel Melnick, who was a partner, along with Leonard Stern and David Susskind, of the show's production company, Talent Associates, to capitalize on "the two biggest things in the entertainment world today"James Bond and Inspector Clouseau. Brooks said: "It's an insane combination of James Bond and Mel Brooks comedy." ... more on Wikipedia

Get Smart is ranked on...

#106 of 312 The Best Sci Fi Television Series of All Time 944.8k VOTES Here is a list of the best sci-fi shows and best sci-fi series of all time, as ranked by hundreds of Ranker voters. Thi...
#72 of 204 The Most Important TV Sitcoms 82.5k VOTES These sitcoms are important because they either influenced a generation's culture or because they permanently influenced the...
#170 of 201 The Greatest TV Shows for Women 119k VOTES Behold, a complete list of the greatest TV shows for women, ranked by ladies who love to watch television! For stay-at-home ...
#97 of 141 The Worst TV Series Finales Ever 164.7k VOTES The worst final episodes of great TV shows have a history almost as old as TV itself. Whenever an audience becomes so invest...
#57 of 295 People who voted for Get Smart... People over 50 are 2x more likely to vote for this People on the West Coast are 2x more likely to vote for this The Greatest Sitcoms in Television History 957.9k VOTES Best sitcoms ever to air on television includes some of the greatest sitcoms of all time as ranked by fans of TV. What's the...
#143 of 216 The TV Shows with the Best Writing 68.8k VOTES What are the best written TV shows of all time? The Writers Guild of America (WGA) and TV Guide recently compiled its list o...
#112 of 134 The Funniest Shows To Watch When You're Stoned 9.1k VOTES Getting high and watching television go hand-in-hand, but finding the perfect show to watch while getting your smoke on can ...
#371 of 1,328 The Best Guilty Pleasure TV Shows 19.7k VOTES List of the best guilty pleasure TV shows, past and present, including sitcoms, dramas, reality shows, and game shows. These...
#22 of 31 The Best Shows that Won the Emmy for Outstanding Comedy Series 6.5k VOTES Every "Outstanding Comedy Series" Emmy winner ever, ranked in order of preference by the Ranker community. Vote fo...
#10 of 247 The Very Best Shows That Aired in the 1960s 97.2k VOTES List of the best television programs from the 1960s, as ranked by television fans. It was in the 60s that television first b...
#22 of 111 The Best NBC TV Shows of All Time 37k VOTES List of popular NBC shows, ranked from best to worst. This list of the best NBC TV shows, which includes both current and ca...
#7 of 64 The Greatest Sitcoms from the 1960s 27.5k VOTES When you’re in the mood for a good laugh, there’s no better medium than the televised situational comedy. Sitcoms are design...
#18 of 99 The Best Espionage TV Shows 11.5k VOTES Lies! Deception! Betrayal! Romance! Spies! These are the very best espionage shows on television, ranked from best to worst....
#9 of 42 The Best Action Comedy Series Ever Made 1k VOTES The best comedy action series are a rush, perfectly pairing the excitement of an action series with the laughs of comedies. ...
#11 of 69 The Best Ever Spy TV Shows 37.3k VOTES The very best spy shows on television, ranked from best to worst, including British spy TV shows and series. This list of th...
#29 of 47 The Best 70s TV Sitcoms 27.7k VOTES What were the best sitcoms from the 1970s? Perhaps "Mary Tyler Moore" or “Sanford and Sons”? This list of the grea...
The Most Popular TV Shows Of The 1960s 1.6k VIEWS If history was judged by the most popular TV shows of the '60s, it would appear Americans were buffoonish caricatures who al...

Get Smart is also found on...