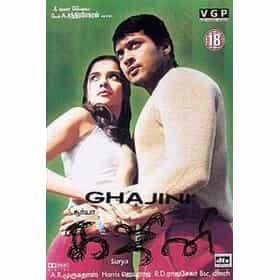 Ghajini is a 2005 Indian Tamil psychological thriller film directed by A. R. Murugadoss released on 29 September 2005. The film stars Suriya, Asin, Nayantara, Pradeep Rawat and Riyaz Khan. It was dubbed and released in Telugu by Allu Aravind in November 2005, and both versions enjoyed critical and commercial acclaim. It was remade into a Hindi film by Murugadoss again in 2008, starring Aamir Khan with Asin playing the same role. The film explores the life of a rich businessman who develops anterograde amnesia following a violent encounter in which his love interest was killed. He tries to avenge the killing with the aid of Polaroid Instant camera photographs, permanent tattoos on his ... more on Wikipedia

Ghajini is ranked on...

Ghajini is also found on...