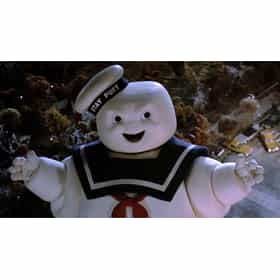 Ghostbusters is a 1984 American sci-fi-fantasy comedy film, directed and produced by Ivan Reitman and written by Dan Aykroyd and Harold Ramis. The film stars Bill Murray, Aykroyd, and Ramis as three eccentric parapsychologists in New York City who start a ghost-catching business. Sigourney Weaver and Rick Moranis co-star as a client and her neighbor. The Ghostbusters business booms after initial skepticism, eventually requiring a fourth Ghostbuster, played by Ernie Hudson; but, when an uptown high-rise apartment building becomes the focal point of spirit activity linked to the ancient god Gozer, it threatens to overwhelm the team and the entire world. Originally intended by Aykroyd as ... more on Wikipedia

Beetlejuice
Moments In ‘Ghostbusters’ That Went Too Far And Scarred Our Childhoods 525 votes Ghostbusters is a classic comedy film that debuted in the mid-'80s and helped establish the genre of blended horror and come...
Every Ghost in the First Two Ghostbusters Movies 2.6k votes You can't have a Ghostbusters movie without ghosts. If there weren’t ghosts jogging through New York or menacingly shoving h...
Behind The Scenes Secrets From 'Ghostbusters' Most People Have Never Heard 49.3k views With a cast full of clowns like Dan Aykroyd, Bill Murray, and Rick Moranis, it's no surprise there are some wacky Ghostbuste...
The Best Ghostbusters Movie Quotes 50 votes The best Ghostbusters quotes make you realize how great the movie really is, even if you haven't seen it in a while. Let's r...
The Lamest Moments in the New Ghostbusters Trailer 380 votes Now that the trailer for the Ghostbusters reboot has hit YouTube, everyone’s had their dreams of a return to ghostbusting fo...
The Most Ghostbusters Moments in the Reboot Trailer 608 votes The new Ghostbusters trailer is jam-packed full of references and callbacks to the original two films. In fact, there are so...
Ghostbusters 2016 Movie Quotes 109 votes Ghostbusters 2016 reboots the classic 1980s Ghostbusters film series following a group of scientists who battle ghosts in Ne...

Ghostbusters is ranked on...

Ghostbusters is also found on...