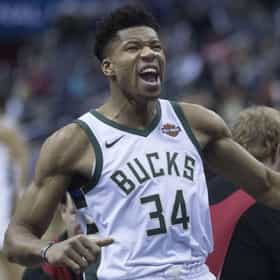 Giannis Antetokounmpo (born December 6, 1994) is a Greek professional basketball player for the Milwaukee Bucks of the National Basketball Association (NBA). Nicknamed the "Greek Freak" due to his athleticism, he primarily plays forward, but is also capable of playing guard with his ball-handling skills. During the 201516 season, he became the Bucks' primary playmaker. In 201617, he led the Bucks in all five major statistical categories and became the first player in NBA history to finish a regular season in the top 20 in total points, rebounds, assists, steals, and blocks. He is of Nigerian descent. ... more on Wikipedia

Giannis Antetokounmpo is ranked on...

Giannis Antetokounmpo is also found on...