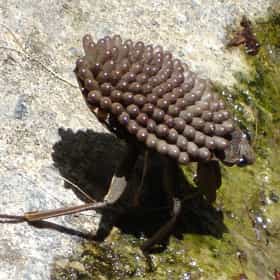 Belostomatidae is a family of freshwater hemipteran insects known as giant water bugs or colloquially as toe-biters, Indian toe-biters, electric-light bugs, alligator ticks, or alligator fleas (in Florida). They are the largest insects in the order Hemiptera. There are about 170 species found in freshwater habitats worldwide, with more than 110 in the Neotropics, more than 20 in Africa, almost as many in the Nearctic, and far fewer elsewhere. These predators are typically encountered in freshwater ponds, marshes and slow-flowing streams. Most species are at least 2 cm (0.8 in) long, although smaller species, down to 0.9 cm (0.35 in), also exist. The largest are members of the genus ... more on Wikipedia

Giant water bug is ranked on...

Here's What Different Bugs Actually Taste Like 6.6k VIEWS Appetites and diets evolve based on the resources that are most plentiful and accessible. Not every culture has the cli...