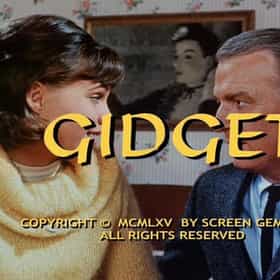 Gidget is an American sitcom about a surfing, boy-crazy teenager called "Gidget" and her widowed father Russ Lawrence, a UCLA professor. Sally Field stars as Gidget with Don Porter as father Russell Lawrence. The series was first broadcast on ABC from September 15, 1965 to April 21, 1966. Gidget was among the first regularly scheduled color programs on ABC, but did poorly in the Nielsen ratings and was cancelled at the end of its first season. ... more on Wikipedia

Gidget is ranked on...

#1336 of 2,297 The Greatest TV Shows Of All Time 1.5M VOTES Choosing the best TV shows of all time means taking into account the best TV dramas, the best TV comedies, the best cartoons...
#198 of 276 People who voted for Gidget... also upvote Star Trek Franchise on The Greatest Sci-Fi Movies of All Time also upvote Star Wars Franchise on The Most Rewatchable Movies The Best Shows Canceled After a Single Season 121.5k VOTES What are the best single season canceled shows in television history? These shows were actually really great, but for whatev...
#103 of 247 The Very Best Shows That Aired in the 1960s 97k VOTES List of the best television programs from the 1960s, as ranked by television fans. It was in the 60s that television first b...
#47 of 106 The Best Teen Comedy Series Ever Made 3.5k VOTES Comedy series for teens have to walk a delicate line, not being so childish they’re off-putting to their audience, but also ...

Gidget is also found on...