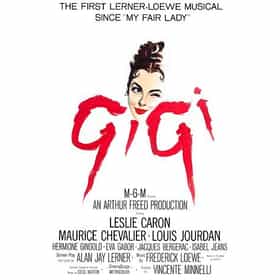 Gigi is a 1958 American Metrocolor musical romantic comedy film directed by Vincente Minnelli. The screenplay by Alan Jay Lerner is based on the 1944 novella of the same name by Colette. The film features songs with lyrics by Lerner; music by Frederick Loewe, arranged and conducted by André Previn. In 1991, Gigi was selected for preservation in the United States National Film Registry by the Library of Congress as being "culturally, historically, or aesthetically significant". The American Film Institute ranked it #35 in AFI's 100 Years...100 Passions. The film is considered the last great MGM musical and the final great achievement of the Freed Unit, headed by ... more on Wikipedia

Gigi is ranked on...

#104 of 213 Musical Movies With the Best Songs 103.7k VOTES What are the greatest musical movies with the best songs? This list includes many of the greatest movies ever made, in large...
#84 of 672 People who voted for Gigi... People in the South are 2x more likely to vote for this The Most Overrated Movies of All Time 744k VOTES The most overrated movies of all time in one list, ranked in order of how overrated they really are. Being overrated doesn't...
#80 of 127 The Best Oscar-Winning Scores 9.9k VOTES What is best Oscar-winning musical film score? This list includes every film score that has won an Academy Award. Oscar-winn...
#84 of 93 People who voted for Gigi... Women are 2x more likely to vote for this The Very Best Oscar-Winning Movies For Best Picture 219.1k VOTES All of the best Oscar winning movies that won the Oscar for Best Picture. Currently, there are 90 movies that have won the h...
#36 of 41 The Best Musical Love Story Movies 3k VOTES Sometimes, it's best to say "I love you" in a song. Perhaps that's why musicals and romances are a match made in...
#3 of 211 The Best Movies of 1958 4.4k VOTES List of the best movies of 1958, with movie trailers when available. Many remember 1958 as the year Jack Nicholson made his ...
#17 of 101 The Best G-Rated Romance Movies 2.9k VOTES List of G-Rated romance movies, ranked from best to worst with movie trailers when available. This list takes the best G-Rat...
#19 of 65 The Greatest Musical Comedies, Ranked 5.8k VOTES   Like spaghetti and meatballs and peanut butter and jelly, music and comedy are a match made in heaven. The best mus...
#43 of 52 The Best Comedy Movies of the 1950s 3.2k VOTES Some of the best '50s comedy movies include Marilyn Monroe, the Blonde Bombshell herself. She appears in several i...
#59 of 163 The Best Musical Movies Rated G 8.3k VOTES A list of the best G-Rated musical movies ever made, ranked by film fans' votes. This list is ordered by popularity, so only...
#7 of 17 The Most Romantic Movies Set In Paris, The City Of Love 63 VOTES Most people think of romance when they think of the "City of Light," so romantic movies based in Paris are a no-br...
AFI's Top 100 Love Story Movies 18.7k VIEWS AFI's list of the best love story films of all-time. This romance movies list is sure to sweep you off your feet.

Gigi is also found on...