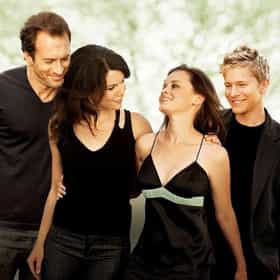 Gilmore Girls is an American comedy-drama series created by Amy Sherman-Palladino, starring Lauren Graham and Alexis Bledel. On October 5, 2000, the series debuted on the WB to widespread critical acclaim and remained a tent-pole to the WB until it was canceled in its seventh season, ending on May 15, 2007 on the CW. The show follows single mother Lorelai Gilmore and her daughter, also named Lorelai but who prefers to be called Rory, living in the fictional town of Stars Hollow, Connecticut. This is a town filled with colorful characters, which is located approximately 30 minutes from Hartford, Connecticut. This town has become the beloved home of the mother-daughter duo, who have made ... more on Wikipedia

Gilmore Girls is ranked on...