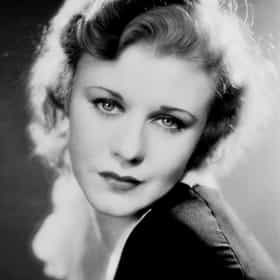 Ginger Rogers (born Virginia Katherine McMath; July 16, 1911 – April 25, 1995) was an American actress, dancer, and singer. She is known for her starring role in Kitty Foyle (1940), but is best remembered for performing in RKO's musical films (partnered with Fred Astaire) on stage, radio and television, throughout much of the 20th century. Born in Independence, Missouri, and raised in Kansas City, Rogers and her family moved to Fort Worth, Texas, when she was nine years old. After winning a 1925 Charleston dance contest that launched a successful vaudeville career, she gained recognition as a Broadway actress for her debut stage role in Girl Crazy. This success led to a contract with ... more on Wikipedia

Ginger Rogers is ranked on...

Ginger Rogers is also found on...